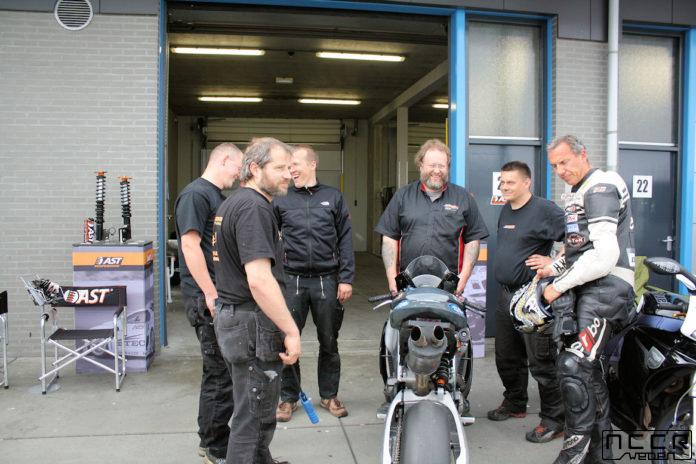 We started roadracing with Buell Motorcycles back in the days with the old Tubeframers. The first bike we competed in Clubsport Racing was called the Boyracer, it was based on a Buell M2 frame where we chopped off the steering head and changed the geometry of the bike completely.

Engine Tuner was Alex Kucis from M-TeK Engineering and with motorsport journalist Mick Hüby we had some podiums. The bike performed quite well in the Classic Bears races against the other air-cooled bikes from Italy and Europe.

On the Boyracer followed Thor’s Hammer, the bike was twin carbureted and had a better aerodynamic and cooling. With rider Tommy Schuler we won the first Championship. The Hillbilly-Motors Raceteam was formed by us in 2003 with the technicians Alex Kucis, Christian Hoffmann and Heiko Jessat, hard to say how many weekends we spend out there in the paddocks. Later we overtook the operation of the XBORG Internetforum Buell XB racebike which brought some more experience and publication.

But the time of the pushrod bikes found its end also for Buell with the launch of the Buell 1125R in 2008. Laptimes and the goals of the team improved, new riders, like the legendary Supermono Champion Manni Kehrmann brought in new influences and ideas. When the Team in 2009 changed its name to Pegasusraceteam.com, it was the start of a 2-year journey with rider Harald Kitsch and the EBR 1190RR from victory to victory. The team’s “zero error” policy lead by Christian, the outstanding performance of Harald and the perfect engine preparation by Alex let us claim the Sound of Thunder / Thunder BEARS Championships in 2010 and 2011. In many fastest laps, pole positions and victories, including the Ducati Clubsport Races in Assen/Netherlands, we had 1 (one) mechanic related DNF (did not finished) in those 2 years. No team could be more proud of that performance.

This will be the place where we will come back to that Racing from time to time with stories of that nearly 2 decades of racing the East Troy Twins.