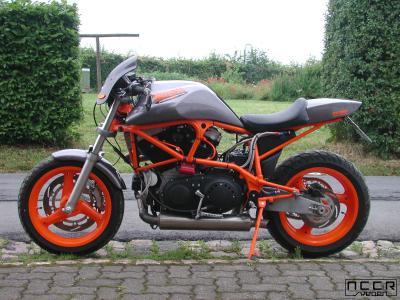 The Guinea Pig for Years to come. By Hillbilly-Motors.

The year is 2001 and my dad, Jens, had just bought his first “real” Buell (the RSS doesn’t really count as it was made in 1991). Hillbilly-Motors was still in its very beginning turning from a hobby into a lucrative business. New parts had to be developed, so a Guinea pig was needed

In the version shown here, the M2 did not only have a face lift (quite literally) with LED technology which was all the rage back then, because it was brand new. It also Hillbilly-Motors’ narrower tail, larger aluminium air filter and Lucky’s Exhaust.

The newly developed foot peg plates made for a more comfortable ride on longer stretches as they moved the pegs about 45mm up and back.

The biggest feature, however, was the M-Tek Stage I cylinder heads which granted the M2 115hp and 130Nm. So, a chain conversion was more than due.

For those who don’t know: before we moved to Sweden, we used to own Hillbilly-Motors – the single largest supplier of Buell after market parts in the world. The company was sold in 2006, the same year we moved from Germany to Sweden. We decided to collect all official project bikes here as well – just for fun really!