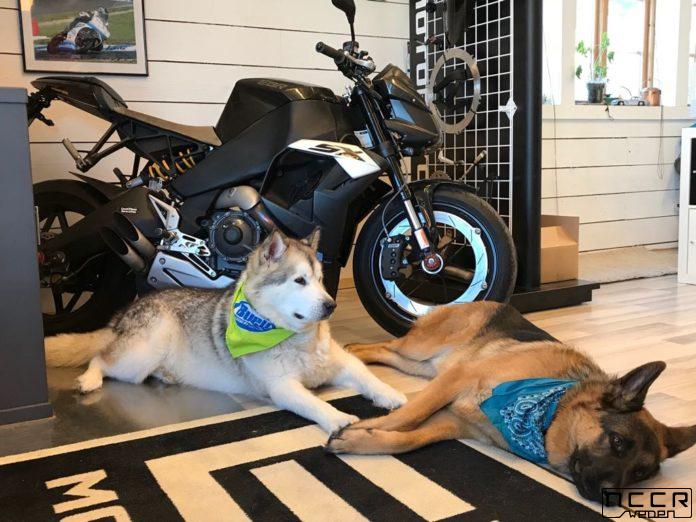 The pretty Lady who has loads to say.

In February 2015, some time after Tanne, our previous dog, had passed, we were still heartbroken. My parents had just delivered the Buell XBRR JPS to its owner in Norway when they realised that there was a litter of Alaskan Malamute puppies close by. Unfortunately, there was only one puppy left and Birgit feared it wouldn’t be the one whose picture she had fallen in love with. They decided to check it out anyway and when they arrived, one snow white puppy with brown ears was left – the one she had wanted from the beginning!

I was studying in Uppsala at the time and only received a message containing this picture and “We need name suggestions!”. Being a sled dog and loving the Snow, Smilla was our only logic choice. If you haven’t heard of “Miss Smilla’s Feeling for Snow”, you should definitely check out the book or the movie!

Now, Miss Smilla is very much a lady. She is rather careful and doesn’t bark – but the talks and awhooos when she feels like it. She’s VERY outdoorsy and has taught Skippy, who’s 2 years younger, that water isn’t scary and cows are friends. If she likes you, she’ll be the friendliest dog you’ve ever met – if she doesn’t, she’ll ignore your very existence. She is very much like a cat in that way, I guess.

Smilla is Birgit’s dog and apart from hiking and sledding, they also kickbike together. I honestly am too much of a chicken to do this properly – but basically Smilla pulls my mom through the forest over sticks and stones at an insane speed. Kind of like motocross, but without an engine and with teeth and fur, instead.

One could argue that Smilla wasn’t the happiest when an annoying Skippy came along as a puppy… Being an only dog was maybe more to her liking, but now they’re inseparable and whenever I travel somewhere with Skippy and come back home, the biggest “welcome back” will be between the dogs.

Both dogs have been featured as photo and video models. While Skippy is well behaved (“and boring”, mom would say), Smilla is the unruly fun-factor that brings unpredictability to our shoots and lets us improvise with her. Just watch the videos below and see what I mean – especially the first one where she says Arrooooooooow!