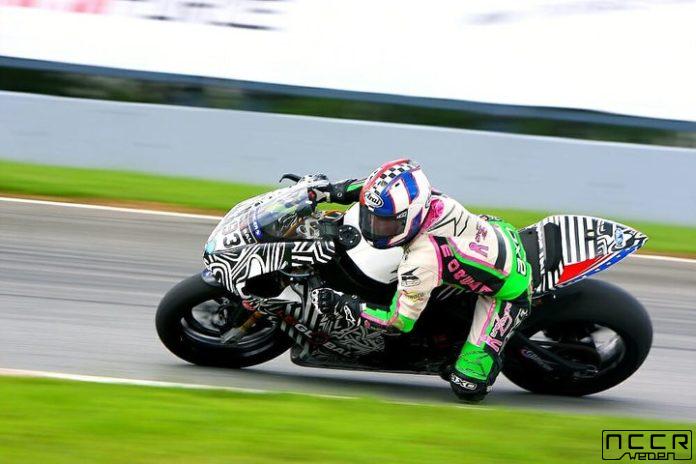 A Piece of History. Make it Yours.

The bike is based on the 2013 EBR 1190 RS in full carbon race configuration. John Dimbylow: “All bikes are full factory race specification with all original parts fitted at the factory in East Troy by Chief mechanic Tony Pogue under the personal direction of Erik Buell himself, the engines were all built by Shane Myers to Erik’s specifications. All maintenance over the entire life of the bikes has been carried out by Tony Pogue alone, no one else has been allowed to touch the bikes”. Shelina Moreda raced on that bike at the Chinese Pan Delta Superbike Meeting on the podium. The bike is in very good condition.

John Dimbylow: “This bike was raced by America’s fastest woman Shelina Moreda. After winning pretty much everything that we had attempted in China, we thought it would be fun to break some more boundaries. A woman had never raced a superbike in China, so when we announced this, there was a media frenzy, and indeed, much opposition. We did a lot of testing before hand, getting Shelina used to the heat and the culture, food etc, but the experience was incredible. The Chinese people loved Shelina and as usual, Shelina was a “movie star”, greeting everyone with a smile, turning heads and she gained the respect of all of the male racers, in fact, it became quite a problem on times as there were so many autographs to sign and people to say “hi” to, we had to allow ourselves additional time to do anything and everything. The practice and the testing paid off, with Shelina achieving an incredible podium in front of 70,000 cheering fans and a live 450 million TV audience. We flew Sony’s top pop movie maker Truman Kewley out to make a video of the whole thing, amazing life experience”.

Don’t worry if you’re tight on cash – you can still get a limited Artprint of it or any of the other WSBK and Splitlath Racing bikes.

Check out the videos and pictures below and contact us if you have any more questions.