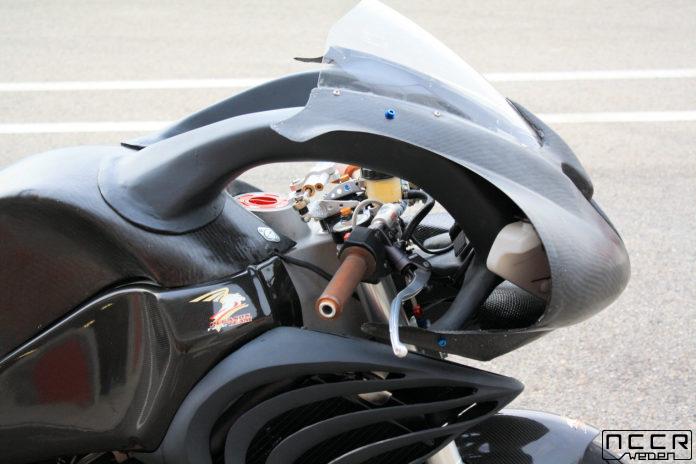 “Looking like something H.R. Giger found in the bowels of an alien vessel”

We are known to have a name of designing from time-to-time bikes that kind of polarize. Jalopnik said about NCCR’s Buell 1125 Race Experimental in a revenue in 2010 “Looking like something H.R. Giger found in the bowels of an alien vessel”.

Here’s the story.
Back in 2009 when H-D decided to abandon the Buell brand and discontinue the production, NCCR needed to think about the future of the race activities. Erik was just putting the things together to start EBR Erik Buell Racing, but things were not clear yet.

After winning the German Thunder Bears Championship in 2007 with Thors Hammer and rider Tommy Schuler, we renamed the Hillbilly-Motors Race team in 2008 to Pegasusraceteam.com and with the help of sponsoring we got some Buell XB out on the grid. M-TeK Alex Kucis was doing the engine work and our part was all the other things around. We had sold Hillbilly-Motors in 2007, moved the family operation from Germany to Sweden and started NCCR.

In June 2009, Pegasusraceteam debuted at the Festival Italia with our own designed bodywork on the XB and 1125R. It was a half fairing with a centered front air intake, a fairing bracket with integrated air funnels and a monocoque style seat/tank cover combination that put the rider in a more modern riding position 70mm backwards and 60mm higher. The first sets of that bodywork were built inhouse at NCCR in fiberglass and carbon fiber. Very tricky was fabricating these air funnels as one structural piece – for this we used woven carbon fiber hoses, we expanded chunked in resin in the molds by a partial motorcycle hose covered in some roasting tube plastic material. Those where the days before 3D printing and all models need to be done in wire, foam, wood and filler.

Buell was a prospering brand and the production was still under full steam in East Troy / Wisconsin. As the main design of the bodywork was going back to 2002, race activities and some fresh ideas should also open some business opportunities for the young NCCR company. So the family bought a carpenter shop close to the house and started to rebuild the facility. The race season was a bit bumpy because of rider issues, like the great Manni Kehrmann, multiple Supermono Champion never feeling comfortable with the geometry and the ZTL brake of the 1125R.
But towards the end of the season, we could find a deal for 2010 with Harald Kitsch who just won the 2009 Sound of Thunder Championship on a KTM RC8. Jessica Baruth or Robin Taborski would race the aircooled Buell XB with the similar bodywork.

At the season finals at 2009 Biketoberfest, we signed Harald in for a first test race into the Pro Thunder class. The Pro Thunder rulebook back then was for the Buell 1125 quite on the edge, regarding the power/weight ratio. So we where forced to run even the stock exhaust system.
With less then 1h track time on the 1125 and the ZTL brake system and after major geometry changes, Harald could finish that race as second. First race – first podium. Nobody could imagine that this would be the start of one of the most successful cooperation in Buell race history, but nobody could know either that all plans would get hit by a major drawback very soon.

There were rumors that Buell would soon come up with an 1125R successor, called the Barracuda and at the end of September 2009, plans were drawn up to go with Harald for the 2010 Sound of Thunder Championship on the new bike.
All involved were super excited about that new chapter, until October 15th 2009, when a tired looking Erik Buell announced in a video message the immediate production stop and termination of Buell Motorcycles.