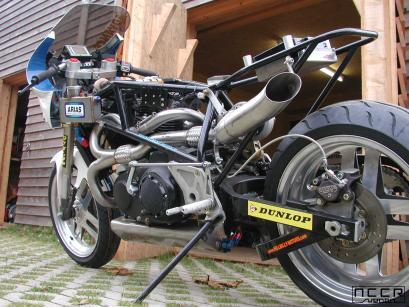 One of the first, but definitely not the last. By Hillbilly-Motors.

I remember my dad getting this bike in 1999. I was 8 years old. It was so big and so red – but not for long. My dad rode it a couple of times and decided he needed more power. Of course…

So “Turbo Charger” he said – and did. But wanting to keep the original look of the red fairings, all tubing had to fit under – quite the tight fit.

The Swingarm was lengthened 100mm to make space for the turbo charger. The PM rear rim was widened to 6.5″ to accept an 200 tyre. The engine was rebuilt and special cylinder heads were developed by M-TeK. A Pro Flow oil pump provides the extra oil circuit with oil from the 4.5″ oil tank under the engine. The Mikuni carburettor mixes up the goodies for the Garret charger and the idea was an additional alcohol injection, but this last part wasn’t realised to my knowledge.

The bike was even at the German university FH Aachen for highspeed studies in a wind channel.

In 2021, the RSS is still standing in out show room and one sunny day Jens might actually finish it and ride it out on the streets again.

For those who don’t know: before we moved to Sweden, we used to own Hillbilly-Motors – the single largest supplier of Buell after market parts in the world. The company was sold in 2006, the same year we moved from Germany to Sweden. We decided to collect all official project bikes here as well – just for fun really!